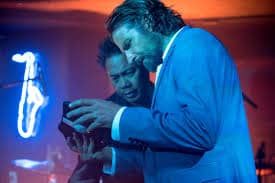 The Cinematographer Who Gave Birth to “A Star is Born”

A Star Is Born cinematographer’s work has been defined by an empathetic, visceral camera that adjusts to the film’s emotional rhythms.

In creating the film’s visual language, cinematographer Matthew Libatique knew he would need to design a shooting plan that allowed the film’s stars, Bradley Cooper and Lady Gaga to explore.

It’s a trait most notable in Libatique’s camera movement which has an ability to not only find the right composition, but to also match the rhythm and emotion of the scene.

For the music in A Star Is Born, Libatique would study the songs intensely as soon as he got them. When it came time to shoot he would have up to four cameras — with Libatique always having an Arri Alexa Mini on his shoulder as well. The goal, though, wasn’t to have them all shooting at once, but rather to treat each as an A camera, often with different lenses.