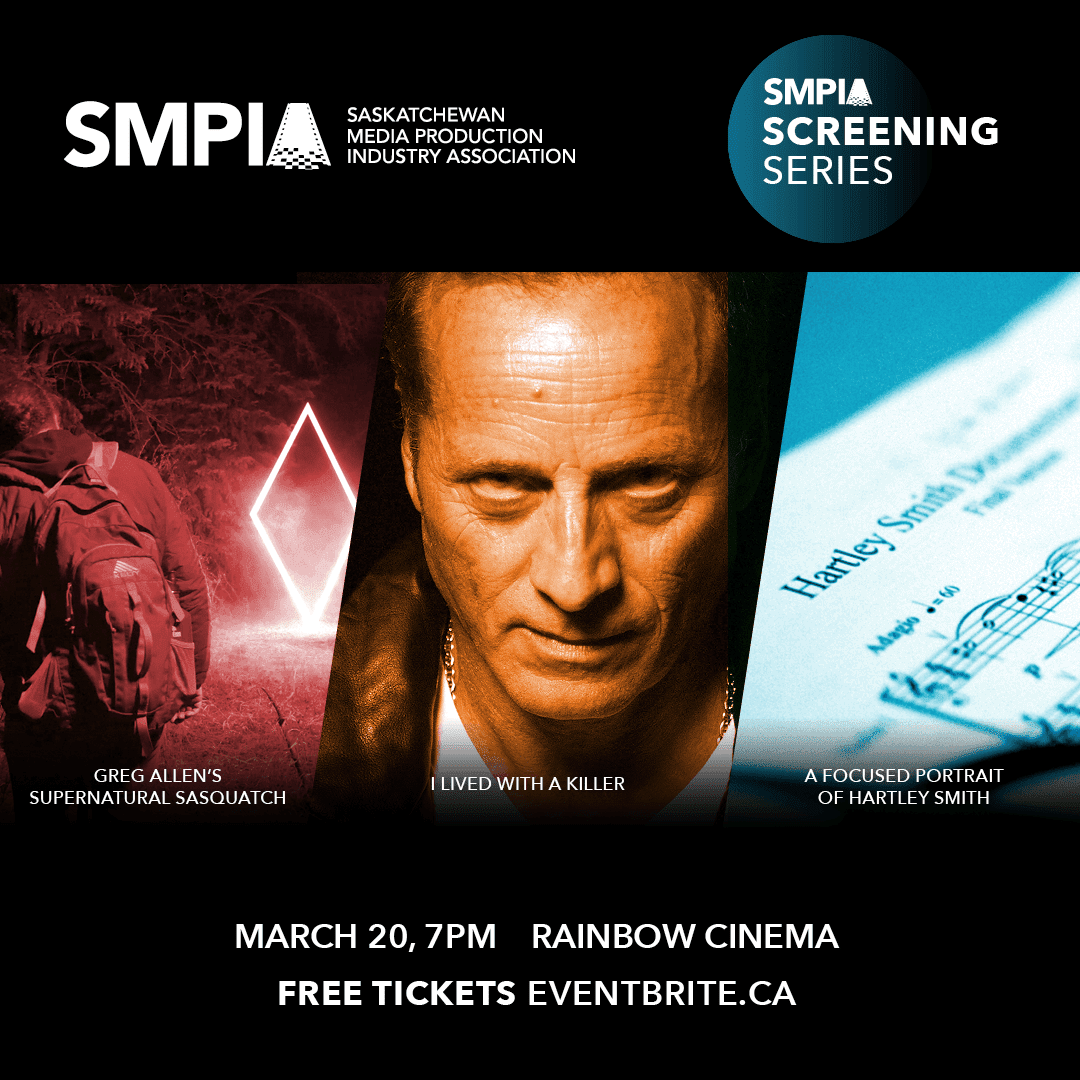 Join us for another SMPIA Screening Series evening – a showcase of new Saskatchewan film and television.

We will be screening A Focused Portrait of Hartley Smith by Kolby Kostyniuk, Greg Allen’s Supernatural Sasquatch by Jeremy Ratzlaff, and I Lived With A Killer by Steve Allen.

A Q&A with the filmmakers will follow each film.

The tale of a melancholic, interdimensional bigfoot and the artist who created him.

Regina artist Greg Allen’s preoccupation with the Sasquatch goes back to his youth, when he vividly remembers seeing the notorious Patterson-Gimlin film for the first time on television. Now, Allen’s paintbrush is hard at work, delicately applying thin strands of yellow and purple paint to the broad shoulders of his muse (and creation), the Supernatural Sasquatch.

Director/Producer
Jeremy Ratzlaff is a self-taught filmmaker home grown on the Prairies. Favorite projects include the profiling of wonderfully creative individuals pursuing their craft in the middle of nowhere.

Their lives are portrayed in movies, TV shows and books and their shocking acts are woven into the fabric of scary stories about real monsters in the world.  But what happens when the monster is someone you live with and love? We will feature a series excerpt about one of New York’s most powerful mobsters, Sammy ‘The Bull’ Gravano and hear from his daughter Karen.

Director/Producer:
Steve Allen is a principal partner, founding member and a Producer and Director with the Wavelength Entertainment Group. Steve has worked in the television industry as a Director and Director of Photography on television series and commercials since 2001. His credits include work for History Television, Discovery Channel, Discovery Military, The Smithsonian Channel (US), A&E Biography, Reelz and TLC. Among his awards he received a Showcase Best Photography Award and a nomination for a Canadian Society of Cinematographers C.S.C. Award for Best Cinematography.

A FOCUSED PORTRAIT OF HARTLEY SMITH (9:30)

A time may come when you’ll be forced to give up something that you love. ‘A Focused Portrait of Hartley Smith’ explores that experience as Hartley reflects on two parts of his life that inevitably overlapped.

Director/Producer
Kolby Kostyniuk is a Saskatoon based filmmaker. A graduate of the University of Regina’s Film Production program his current focus is in documentary filmmaking. In 2015/2016 he wrote and directed his neo-noir inspired short film Dreamers, which won Best of Saskatchewan at the 2017 Living Skies Student Film Festival. He has also been nominated for two Golden Sheaf Awards at the Yorkton Film Festival and two Saskatchewan Independent Film Awards.